It is the last Sunday of October 1861. Sacrament meeting is being held in the Old Council House in Salt Lake City. President Brigham Young presides. Abijah McIntyre, a handsome, dark bearded man in his early forties, is seated with the other dignitaries upon the rostrum. (He is a member of the Seventies, an organization in charge of missionaries, and next to the apostles in importance). The congregation is seated upon wooden benches and Abijah’s family occupies the first bench directly beneath the rostrum. His wife, Bathsheba, a big-bosomed, imposing, stern-looking woman is seated beside her six sons, ranging from 16-year-old Freeborn, the eldest, down to the toddler, Isaiah. On her right is 17-year old Clorinda, brought up in the family as a daughter. Abijah had dandled her upon his knee in Philadelphia where he converted her father and brother converted to Mormonism. Clorinda’s father was a prosperous craftsman of fine jewelry, but when his wife refused to join the Church, he had left his business and assets to her and with his two children had walked across the plains in Abijah’s “Company of Ten.” But on this journey he had succumbed to the “green sickness”. And later, during the Starving Time, her brother had died from eating poisonous roots in Salt Lake City. Thus Abijah and Bathsheba were really the only parents Clorinda had really ever known. Clorinda is seated next to her best friend, Palmyra Wight and Pal’s husband David.

The congregation has just finished signing the opening hymn, Oh Zion, Dear Zion, and one (?) seated by the choir conductor with a rustle of standard Sunday-go-to-meeting finery. President Young suggests that Abijah McIntyre give the opening prayer, and Abijah does so at great length, spurred on by his own eloquence. Clorinda whispers to Pal that “Pa forgot to bless the corn on my big toe,” and both girls dissolve into a paroxysm of giggles. Both Freeborn and David have difficulty maintaining their own proper piety. Whereupon Abijah interrupts his prayer long enough to fix all four with a baleful eye. And Brother Brigham having repeatedly compared a windy prayer to a “braying jackass”, clears his throat significantly.  Abijah hurriedly ends his suggestions to the almighty, “Name of Jesus, amen,” and sits down.

Brigham Young, President, Prophet, and Revelator, now rises portentously to his feet and his people awaken from Sunday’s somnolence.

“As you know,” said Brother Brigham, “the devil has condemned the East to Civil War and we can no longer look there for trade. To survive we must now depend entirely upon ourselves not only as to food but to clothing. Down south, fifty or so miles below Cedar Fort, there is a place surrounded by mountains that the Indians call “Farm Valley”. Our good bretheren have gone there by horse-back, spent the summer, and proved that the climate is suitable for cotton. We must colonize that country, folks, and grow cotton—enough cotton to clothe the whole of Deseret, if needs be. I have here in my hand a list of the bretheren whom I am Calling to do this work, good stout men who won’t be scared off by a trifle.”

“It is our decision to allow you two weeks to disperse of your property up here, acquire your wagons, and stock them the duly required essentials. And no men must attempt this journey until he has acquired them!

“Now, if you can’t sell your property, I say to you, trade it for wagons, food supplies, or give them away! You will be going South to build new churches and new homes, to spend the rest of your lives. We are calling carpenters, blacksmiths, tin smiths, potters, fiddlers, and educators, as well as tillers of the soil. So, don’t leave an old sow to suck up here!

“We have set apart Apostle Erastus Snow to be your leader, the father of the Dixie Mission. He will hand out lists of essentials for the journey as you leave today. And I promise you, my dear brothers, you will prosper in this undertaking!”

And now as Brigham prepared to read out the names of those called, the congregation for once was struck dumb with consternation.

As the choir leader announced the closing hymn and raised his baton for them to arise, Clorinda reaches behind Bathsheba to pinch Freeborn, and under cover of the turning of pages and the opening chords of the organ, the two creep hurriedly down the aisle and out the door.

Breathless from running, they reach the McIntyre home. Aunt Willie, left at home to cook dinner, is setting the table.

“Hurry!” cautions Free. “Did you see Pa’s face when Brother Brigham called out his name? You can bet he’ll be mad enough to stomp all the way home!”

“Mebbe, mebbe not. Anyway Aunt Willie has some squashes and a bucket of last night’s milking squirreled away for your soldier-boy to take down to the camp, and you’ll have time enough to say goodbye.”

Clory grabs the squashes and milk from Willie and rushes out the back door.  Voices are heard in the distance, and after a time she re-enters, her cheeks scarlet, her eyes enormous. She stares as Free, blinks her eyelashes, and dances with excitement.

Free blushes, stammers, and starts toward her. “Well, he isn’t the only one to snatch a smooch!”

She stares, astonished. Free laughs. “But Clory, remember, you aren’t really my sister!” 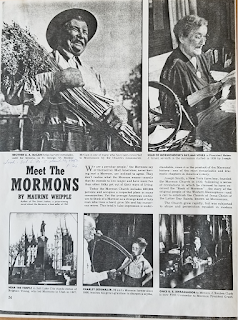